Braciole even Sonny Coreleone would have appreciated

The last two days I have felt a slight sense of melancholy. Not one that hurts from the inside out, but one you feel you would want to somehow shake off, as if it were an insidious patina that covers your skin and that just can't be rubbed off. It was a feeling not onset by depression but by the nostalgia resulting from an innocent and incessant bombardment of images, visual and imagined, recalling the ways of life and culture in my beloved Italy.

To list of few: yesterday morning, the impatient human deluge of Italo-Americani riffling through a congested Arthur Avenue in the Bronx; yesterday afternoon, the intensely polychromatic images of the market at Campo dei Fiori in Roma during a rerun of Lidia's Italy; this morning a refreshing, yet too quick phone chat with my very artistic cousin GianCarlo in Firenze; and finally earlier today, 10 minutes of fast actioned Italian Serie A soccer as Palermo won over AC Milan, a solidaritous treat for a Calabrese like me.

These days I regularly dream of a return to the origins. As much as I am grateful for all the that the American experience has granted me, my heart still points to Italy. Several years ago I have put in motion my plan to return. Whether I can stick to my original plan, which these days feels a bit Odyssean, only time can tell. For now I am resigned to all of my preparatory actions that some day might lead towards that direction.

This weekend, the cooking business was slow with only a few dishes worth documenting. Last weekend was much more interesting. Unfortunately, I did not have access to my digital camera, so was unable to capture my shots of my work. Had I written about it, I would have named the the chapter "Christening my cherry Le Creuset". The inaugural dish was a personal variation on "Ossbuco alla Milanese" served along with a whole wheat Reggiano couscous. I will repeat the dish in a few months , and properly document the experience. For now, let me attest that Ossobuco tastes even better the day after.

But now let's get back to this week.

Cod, as you might have noticed by now, is one of my favorites. It has been called the fish that changed the world and certainly played a essential role in New England's rise and fall. 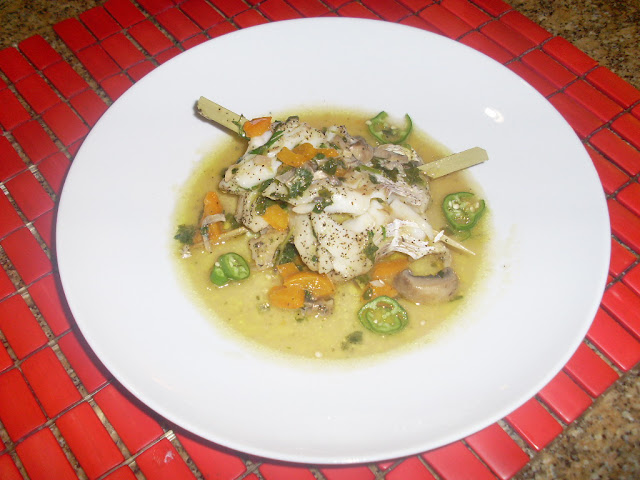 On the culinary side, Cod is a mild and delicate tasting, flaky white fish that yields great results in very short cooking times. In this recipe, I have turned to my old friends in Chinatown for a techniques to keep the fish from breaking apart: bamboo and steam. I have used short bamboo skewers in a cross-pattern to keep the fish from disintegrating. Rolling up seasoned fillets of fish and then holding together with skewers or toothpicks also works well for sole and flounder. I use mostly steam rising from the little bit of fluids in pan to cook the fish. This helps preserve taste, and nutritional value.

Mince half of the mushrooms, slice the other half. Wash the code, season with some salt and pepper, cover with minced mushrooms, 1/2 of the bell pepper , parsley. Roll out tight as if you were making braciole, and then skewer diagonally with 2 bamboo skewers. Set aside. Note , no minced garlic was placed inside the fish, as it would not cook and would overpower the the cod.

In high edge pan, add EVOO , garlic, and cook on low heat, so that the garlic releases some of its oils and flavors, and do this without browning. Add the bell pepper, and fluids. Bring to a quick simmer. lower the heat. Take the Braciole, and place then in the pan, standing on one end if possible. Top with remaining parsley. Season a second time. Cover the pan, cook on very low heat for 15 -20 minutes. Try not to move the fish as it could break apart.

Carefully plate, and garnish with slice chili for a splatter of mild heat.

Serves best with a crisp, light white wine. A fresh Sauvignon Blanc should do the trick.

Rating: The fan club could not resist it , even after 2 serving of spaghetti with white clam oreganata sauce.

Today's Lesson: Do not be afraid to learn from far eastern cooking techniques. Asia has had a serious head start.