The Fan club unanimously gave me an 'A'

Here's what happens when "meat and potatoes" just does not cut it on a lazy Sunday afternoon. Skip the potatoes, and head to the root cellar for some good old country spaghetti squash.

Well, to be honest, my root cellar is really a space in my cold garage. It's where the spuds, and other root veggies like to play, and await their final destiny.

Lean pork can do wonders. It is fast, light and certainly beats chicken any day of the week. With or without a mushroom side , tasty pork loins can be the protein that you can easily to add to your Sunday dinner. Potatoes welcomed. 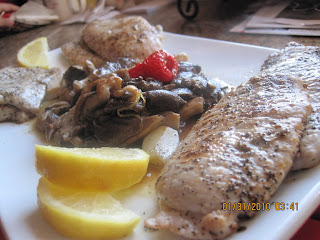 Ratings
As the title says, these two dishes were graded a unanimous "A". I am grateful. From my perspective, I was quite surprised. This was some of the best tasting pork I had had in a very long time.


Recipe
Sautee' the mushrooms, ensuring that they remain tender at all times. This can be done by cooking on medium to high heat, and by making sure that during the cooking some fluids remain on the bottom of the pan.

To saute' the Oyster mushrooms use a high edge pan toss E/V, cloves and S/P. After a 2-3 minutes add wine and butter, chili . Cook on reduced heat , avoiding any frying. Add some water if necessary to keep the mushrooms moist.

Remove the mushrooms, set aside. Without cleaning the pan, add some additional EVOO, place on high heat. Add seasoned pork loin (S/P) and rapidly cook on each side until tender for a few minutes. Since these are thin slices of meat they will cook very rapidly. Almost treat them as scaloppine.

Plate with mushrooms and garnish with lemon slices 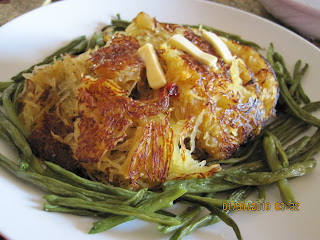 Ratings
The fan club tried the squash right out of the oven, and was instantly disappointed. Redemption came after the final dish was assembled. Going for seconds and thirds was very hard to control. Another surprising hit , tapping into some good old New England inspiration on a very cold winter afternoon.

Cut a 3 Lb in half. Scoop out seeds. Sprinkle with Bake the Spaghetti squash at 375 F with EVOO, S/P, garlic slices , and a drizzle of 2 tablespoons of maple syrup . Bake covered on cooking sheet covered with foil for 2o minutes, then additional 20-30 min uncovered until tender and the top forms light caramelized crust.

Once cooked, remove squash flesh from outer shell with two forks. The squash breaks up into spaghetti like threads. Toss into a bowl with addtional EVOO, S/P, remaining maple syrup.

Pan Crisp the squash in hot skillet until the bottom is golden brown. Fold onto a plate . Garnish with small pieces of butter and roasted string bean corona.