Remember , how I recently said that I was slacking and that my dishes where just not living up to fan club's standards ?  Well today , a new Sunday , I wanted to make sure that the treats continued. Another interesting seafood dish to the rescue during this Lenten period   The gnocchi dish, just filled my Sunday pasta slot with something that everyone always likes. 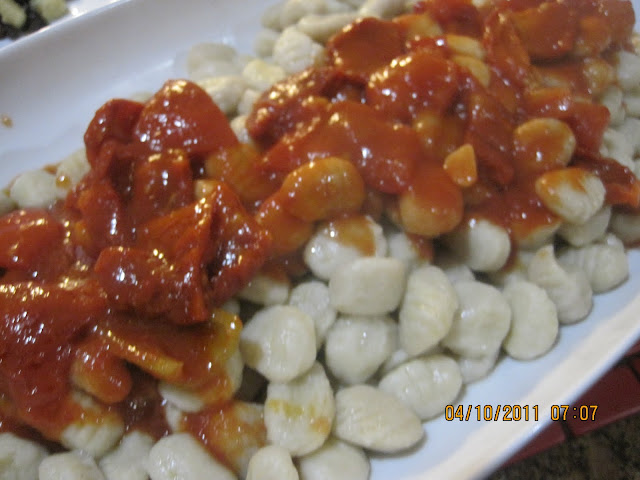 The attention here folks is on the sauce, not that much the gnocchi which are easy to find or make.  What I have been experimenting with is the idea of replacing tomato paste which I rarely use in my sauces with very coarsely chopped sun dried tomatoes. What I have found is that this technique adds that extra hint of sweetness, while allowing to keep the sauce cooking time very short . The more you cook sauce , the more acidic it becomes . If you want to keep no Pepto Bismol in my medicine cabinet.,do not follow the Goodfellas' cookbook.I might have told you before.

One more thing. Did you not all the gnoochi are actually covered in sauce and not inundated in sauce ? There are two schools of cooking style here. . One that says , you must ensure that each bit of pasta is equally coated with your tomato sauce. I follow both schools. Today , I wanted to make sure that we see and taste both white and redof the dish.

To make the rolls, I took the Sole Fillets, covered them with a "line" of filling , and rolled them up. I used both Chinese mini skewers and toothpicks to keep the rolls from breaking a part. They were placed in a high edged pan, and cooked with a lid.  The fillets released some of their own liquids, to which I did add some white wine and some H20 to adjust the moisture level. Essential was the technique of low heat and cooking with a lid to trap moisture.  Extra cilantro was added towards the end of the cooking time.

The almonds added a very unexpected, yet pleasant crunch to the dish. Spread the word ! 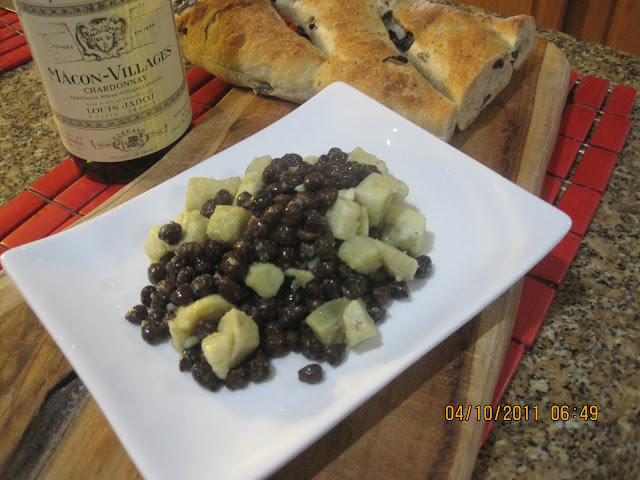 Both the chick peas and the sweet potatoes were cooked independently. I used dried beans which had to be soaked for at least 6 hours and then cooked over slow heat until tender.  4-5 cups of water, some kosher salt and 3 cloves of garlic were added to1lb of dry beans.

Using a ladle, I tossed some of cooked chick peas with their black broth into a skillet. I seasoned them with S/P, pinch of fresh minced thyme and of course, EVOO and then reduced the liquid halfway.

The sweet potatoes were cubed then  cooked in large pan covered with water and salt until very al dente. Then they were drained and cooled. This process took less than 15 minutes. To finish the dish , I combined  both the chickpeas and potatoes  in a mixing bowl with a spatula and very gently mixed then together. I adjusted the flavors with a good does of EVOO , and S/P.

The medley tasted even better the day after.