It's Good to be Queen

Earlier today I felt like making something different, something that would bring together more than one culture. You know that kind of dish that brings together a few ingredients off the beaten track. So I decided to take a stroll to the nearby pan-Hispanic supermarket, La Placita. I have mentioned them before. They tend to carry things from every country in South and Central America. Whether you are looking for looking for uncommon herbal teas that border on the illicit, or greens that can challenge even those acquired tastes as a walk in the park, they've got it.

After a short drive, and a pit stop at Tarry Market for a quick latte, I made my way to the market. It was a good shopping excursion. Plantains , fresh Mexican chilies were the first items that made it into my basket. The big discovery came when, strolling through the fresh vegetable and salad areas, I spotted a sign indicating Verdolaga. Verdo-what ?  That's what I said to myself. I pulled out my iPhone, a quick Google and bingo , Wikipedia to the rescue. Those beautiful looking greens, slightly reminiscent of water cress, had a  Wikipedia page that told me all about this plant and its culinary uses.

Verdolaga or Purslane, is found on most continents, comes in many varieties, and can be cooked or eaten raw. Hey, it looked good, it tasted good - I snuck in a little nibble - and sounded like a perfect ingredient for a citrusy salad. The came da' bomb. According to the article, Verdolaga  also contains Dopamine and "Dopamine plays a major role in the brain system that is responsible for reward-driven learning" A feel-good salad! Two bunch made their way into my basket !


So here's what the Queen and entourage got to eat for lunch.


Preparation Notes:
Clean and trim the Verdolaga, selecting the most tender stems. Make a lemon based vinaigrette using white vinagre. Toss with some avocado and baby cucumbers slices.

Clean the plantains. Make sure to select some that are ripe and some that less ripe, but not green ones. Saute a small red onion in some EVOO, Toss in some small,yellow and orange peppers, and, yellow some heat from Mexican chili peppers  Cook until the onions become translucent  Add the plantains, salt ,pepper, a dash of white,wine. Cover and let cook over low heat until the plantains become soft. Raise the heat, add a few tablespoons (3-4) of white vinegar and black pepper. Cook a few minutes longer so that some degree of caramelization takes place.

Prepare the salmon fillets by steaming them for no more than two minutes in your microwave oven, wrapped in freezer paper and placed in a plastic bag. Then after steaming, flash pan fry in some very hot grape,seed oil. Remove from the pan, season with salt and set aside. 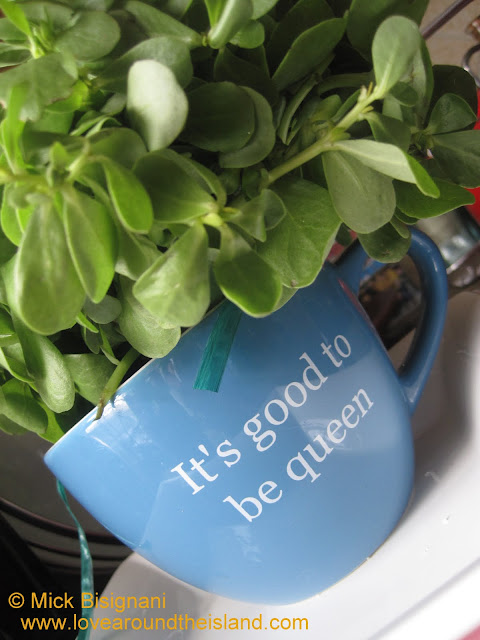 Plate the salmon fillets over a bed of plantains and next to a side of the Verdolaga salad.

It's Really good to be Queen.