Martin Lindstrom, Danish marketing guru, tries to teach a few lessons about how our unconscious mind drives us consumers to make buying decisions.  The key word  here is unconscious. Well in my case, tonight the forces of free will worked without any counter pressure to resist and waiver. Early this evening, I was watching a documentary about the wonderful supermarket chain, Whole Foods Market, you know the one with the green logo, the one with  that has got its own entry in Urban dictionary. Here's an imaginary scene to explain what I mean by this.

Sam uttered : "This afternoon , I picked up some edamame guacamole. Yeah I went shopping at Whole Paycheck". "Ouch, that must have hurt", Carly replied.

Minutes later, I told the fan club, I need to get some air. I am heading to Whole Foods to stroll down the aisles. No objections. I feld.

I came back home very happy, with a couple of bags of ingredients, some of which I intended to use tonight for a lite meal. Actually, I came back more than very happy. I just felt real good, satisfied, as if I had accomplished something that restored a portion of my inner balance back. I have not been spending as much time in the kitchen lately as I would have liked. Travel , long days at work  - yesterday the day ended at 1:30 AM - have impacted this part of my life. Even my blogging has suffered. I've got at least past 7 posts in draft mode as I write this one.

Or maybe it just is much less spiritual that drove me to head out to the market. Maybe, I am just a Whole Foodie in a state of denial, semi-addicted perhaps to the store.

Well, enough talk, let's get to the cooking . Here's what I quickly whipped up on this wintery night. 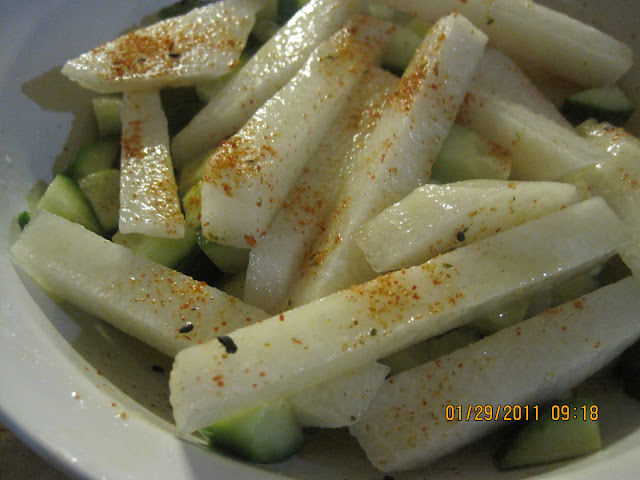 If you have not tried Jicama, go for it. Is is lite crunchy vegetable, popular in Mexico, but also native to Asia.  It's got a slightly sweet taste, especially  when it begins to wilt. You can eat it raw as is, added as a surprise crunch factor to a soup, or mixed with some dressing. That's what I did today . Asian Cucumber bits were added  for a little variety. Japanese condiment pepper (shichimi togarashi) was added to kick things up a bit.

Here's what went into the salad. 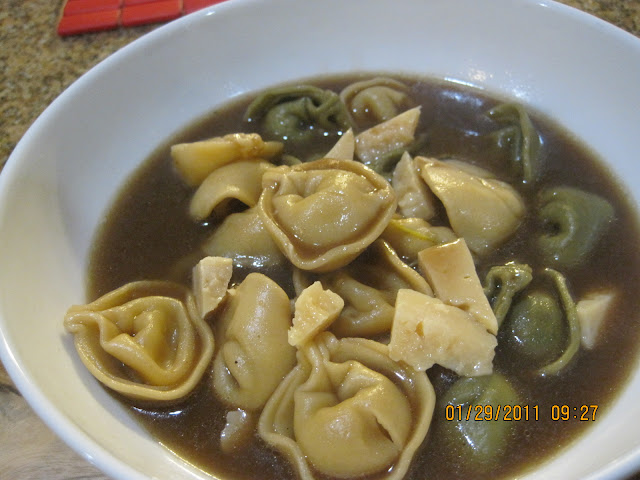 Not much going on here. Either make or buy some pre-made french onion soup. Bring to a boil ., Add fresh cheese tortelloni, Cook until al dente. Top with small chunks of aged asiago cheese. The hot broth turns each little piece into a delicious nugget of gooey goodness.


No wine tonight. Just a few glasses of sweetened Genmaicha tea (green tea with toasted brown rice), kept at room temperature. I thought I would play on the subtle asian theme here. It worked well.

By the way, my purchases at Whole Foods Market were higher the their stated average of thirty something dollars.  I almost doubled it. Ouch ! Carly was right.