I thought of making some thing very different today, very different indeed. To do that, I knew that I would need to make another quick run  to the nearby Tarry Market.  They usually carry things, that are otherwise hard to find.  It's a great store, but you will need a guide if you intend on getting the most out of it. Luckily, the staff there is well versed in gastronomic wonders, and very honest. 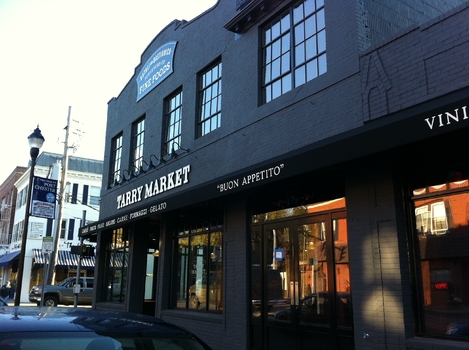 So back to my theme of different. I had not cooked pasta in few days, so the fan club was definitely in the mood for some. But what kind should I make ? Fresh , dry , stuffed, fried ?  As I strolled the aisles, I was first tempted by the some large packages of rottelle-like dry pasta. That would have required a nice tomato sauce, and lots of it too.  But tomato sauce was something too predictable for today's feast. Remember , I said different ?

So I searched and searched until I came cross something very different. I came across a section where buckwheat pasta was being displayed. I am told that kind of pasta, is quite popular in the Alps region. It looked very different and that really intrigued me. I've used buckwheat based pasta products many times. Often I have cooked with Korean buckwheat vermicelli that worked wonders with some fresh tomato sauces.  Talk about East meets West.

As I scanned the top shelving, my eyes caught a glimpse a something new.   The pizzoccheri really stood out. This pasta looks like tagliatelle, but they are cut very short, about 2-3 inches in length.   So one ingredient down, several more to go before we could declare that we had a what we needed  to make dinner.  Not sure if this pasta contains any egg, they  might , but in very small quantity. I am not  a big fan, of egg pastas. I will cook it , but usually do not appreciate the aroma, once it is cooked.

Next came the sauce.  As I browsed the shelves, I came across a quick recipe for dressing ravioli. Was this a Mario Batali, who co-owns Tarry Market, creation or some exotic regional dish ?  Not really sure.  Regardless, the sauce was contained blood orange juice, the same kind that was sitting right there, frozen,  in the freezer below the sign.

So , I decided to pick up a quart of the Sicilian blood orange juice. Pasta with hints of orange . Now that was different, very different. Folks, this was the secret ingredient , It can not be substituted so if you can not find it , forget about making this dish. Caveat ! Caveat ! You've been warned.

To ensure that sauce was able to bind well with the pasta, I decided to add an element of cream. Rather than use heavy cream, I instead opted for a some bufala ricotta ,  a little less than 1 cup of it.

While you are preparing to make the pasta , this very fast sauce can be made in parallel.

In a pan, melt butter over low heat. Add the grated orange zest, a pinch of salt. Also , mix in some EVOO.  Cook for  a few minutes continuing over load heat.  Add ricotta cheese, and soften with some of the warm , and starchy pasta water.

Toss the Pizzoccheri  with the sauce and make sure to serve piping hot. Top with a a hint of coarsely grated Parmigiano reggiano.

I completed the dinner spread with two shrimp dishes. One was an Asian inspired Shrimp with broccoli , and the other was some shelled shrimp cooked in a light blood orange juice sauce.  This was a really bit hit. Too bad, I did not capture a picture The fan club gobbled that one up  faster than I could prepare to capture it on film , correction , SD memory.

To make the dish  clean some shrimp removing shells and veins. Saute' the shrimp in some EVOO, garlic, pinch of S/P, and old bay seasoning, fresh chili pepper. Over high heat, add an abundant splash of blood orange juice.   Do not overcook the shrimp,

Almost, forgot , the blood orange juice, makes  a great cocktail. Juice, crushed ice and a double shot of reposada tequila. It won't let you down.