I decided to go a bit fancy today and venture  away from  the realm of  "faster" meals, to  the pleasant world of slow cooking, filled with love for a passionate preparation.


The meal started with a small , but fancy salad acting as an appetizer. Pear Apples are a across between a crisp pear similar to Asian pears, and sweet golden delicious apple. They can be be perfectly counterbalanced by a bit of a lite vinaigrette.  To make this opening salad dish , I kept the pears in bath of water and lemon juice, to avoid discoloration while I made the the vinaigrette.  The vinaigrette was a simple one, white wine vinegar, with a hint of mirin, suspended in some good EVOO. Salt and a very small touch of salt.  Toss lamb's lettuce florets with some of the vinaigrette. Setup you plates with the pear apple based, topped with the salad. 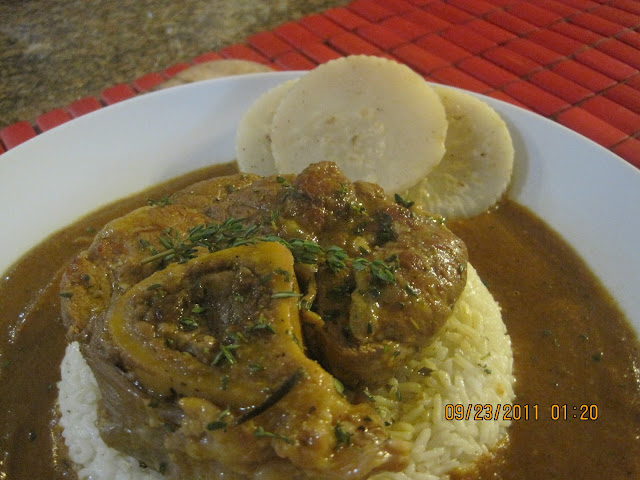 Brazilian style rice is easy to make. It its simply flavored with very thinly sliced garlic that is virtually melted away in  a bit of EVOO to which the rice grains and appropriate amount of salted water is added. Given its great flavor, the rice plays well as a base for rich foods.

Veal Ossobuco is a labor of love and requires many steps.  The meat is prepared by dredging it in seasoned flour and the browned in  heavy Le Creuset cast iron dutch oven  After browning the meat  is removed from the pot which is used to kick start a nice blend of veggies:  1 cup of diced carrots , 1 cup of diced yellow bell pepper, 1 cup of celery (I used celeriac root), medium shallot. and 2 to 3 cloves of crushed garlic.  Cook for a few minutes , then add about 2 cups of white wine, 1 cup of carrot juice, 2 tablespoons of butter, dry thyme.  Bring the mixture to a low boil.  Then Reintroduce the  veal shanks and cook on very low heat for about 2-3 hours until proteins are fully cooked. The meat should literally fall off the bone. The dutch oven should remain covered with a lid for most of the time. If too much evaporation occurred,. add some additional water

Carefully remove the cooked meat from the dutch oven .  Then place all of the vegetable and juice contents into a blender. Puree' until the mixture becomes thin and uniform. Pour the mixture back into the dutch oven. If necessary reduce further and adjust seasoning if needed. Some EVOO can also be added for extra silkiness. The pureed vegetable base will be your osso buco sauce. Reintroduce the ossobuco back into the dutch oven.  Do this very carefully as the meat is very tender and may break apart

To plate,  in an over-sized plate,  using a form , create a base made out of rice. Place  portion of the ossobuco atop the rise. Then surround the rice using a small ladle with some of the pureed veggie base.  Add a couple of celeriac discs (see below ) for yet another bold dimension of taste.


This was a very surprising salad. The greens and the celeriac, remained al dente and bore a very mild hints of pickling flavors. To make this warm salad, you will have to follow two steps. First blanch the Celeriac discs and Savoy Cabbage strips in a some salted boiling water containing some white vinegar.  After blanching, drain and let cool until  just above room temperature. Once cooled. toss with some EVOO, and adjust flavor with some salt if necessary.

A crisp , slightly sweet Hogue Cellars Riesling  was the perfect pairing for this meal., Check out the reviews at www.snooth.com.


Stay hungry my friends! . Meals like these are worth it.