A nice thing about Little Italy in the Bronx is that when you enter the Arthur Avenue market you immediately get a guarantee of good food,  of an old fashioned table where you can sit, and of entertainment by a great cast of urban and not so urban characters.   Arthur Avenue today appeared to be a lot more lively than usual. Spring fever ? Or just the fact that recently snow got in the way.  Well let's not worry about that too much. Instead, let's recount a bit what this spectator saw while he sat down for a quick lunch at Cafe' at the Market.

At its busiest moments the Arthur Avenue market fills up with families (more about that later), the occasional tourist, waves of Fordham college students (the university dorms dot the neighborhood), and endless goombah types, a group I might belong too.  The show was real good today. From my vantage point, I could see and hear a medley of people chitchatting,  the music of shopping, and the tension of incisors chomping down and tearing  away at crispy slices of pizza - a pizza slightly different from your typical New York joint slice. Somewhat Sicilian inspired, this pizza is really comes to life from the mild tomato sauce that is used. Pure tomato essence,. just like I like it.  Any other topping is just gravy. 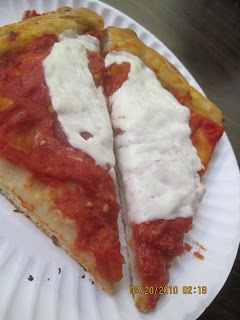 Of course, for those of you who looking for the more exotic, toppings can range from egglplant parmiggiana, to grilled octopus. Your creativity is the limit. My recommendation to all the pizza aficionados out there, go simple first.

At times, it can get quite noisy. All around you can hear the crisscrossing of Sicilian dialect, Neopolitan, and of what sounded like "Barese" , the dialect of Bari , easily identified it by its frequent vowel substitutions of "e" for "a"', something that can sound real funny to a Calabrese like me. This dialect can get you in trouble when applied to certain common words. Ask your friends from Bari about this one.  Of course there was plenty of "Bronx" in the air: rough , loud and yet mostly happy, the perfect accompaniment for a lively marketplace. Strangely , I could heard no Calabrese today.  An omen perhaps? 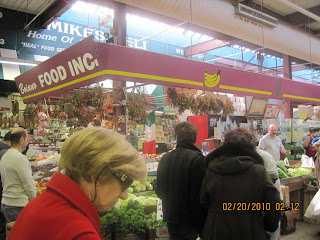 Boianos' Produce and Big "A' , at the right with mustache.
Back to the show. It gets even better. Every ten minutes or so, the background tones were interrupted by few lines of operatic performances by my friends at Boiano's. I am not sure but it might have been "Big-A" (as in Anthony) who was doing the singing. Curiously even the dialog of a couple of nice old Neapolitan Italian ladies recounting how they quickly they were able to get their taxes done, sounded great. They were surely happy, and I'll bet they must have gotten some good dollars back.  Just turning my head, I could hear the action behind the counters, well that was a real harmony of commands, compliments and dashes of dimmed , sotto voce  soliloquy filled with abstruse commentary. Was it  manly gossip ?


The market appears to be attractor for families. Everywhere I turned, I could see baby carriages parked. Baby carriages with real babies, not filled with broccoli di rape, and  loaves of bread, but filled with real babies belonging to real families. One particularly interesting moment was when I observed an austere figure watching over one of the carriages. At first I thought: "Must be the baby's grandfather". Nope, after a few moments I realized that is was the corner cafe' owner. For some reason , the best pizza places in New York and soup places , all seem to have one of those characters - remember the soup Nazi.  Yet, in all of his austerity, he still managed to show his humanity when he uncomfortably directed a sincere smile towards the baby.  I could feel the sting of joy that he must have experienced for that brief moment before returning back to this his important persona of guardian of the corner cafe'. In the Man vs Baby land, Baby wins all the time. And so there was a family man in there after all., Indeed, a few moments later I got even more proof. Let me explain .

His wife was among the cast of characters too. But she operated quite differently . She intermingled with the market visitors and other locals.  At times you could not tell if she was one of the nice Italian ladies shopping for the week. Her gold earrings gave here away, but do not ask me how I knew that. At some point, she took a table , sat and waited. After a short while one of the cafe' workers brought over a plate. I could not tell what that plate was, but I'll bet it you it was something that was not on the menu'.  For brief moment I turned my attention elsewhere, and then when I looked back in my curiosity at the table with the signora's mystery food,. I saw the couple. My austere cafe guardian friend had joined his wife, with his own mystery plate. There they had their semi-private lunch , right there in the market cafe, toasting with two bottles of San Pelligrino  I could see the humanity in both , and most delightful , I could see the family in both.


On way my out, I got one more ounce of entertainment. How often to you see a crew playing enjoying a nice game of "briscola"  in one of the more remote corners while some store renovations were underway.  It seemed like moments of pure enjoyment, especially if we include the glasses of wine and the large beer discreetly hidden from view. Was I in the Bronx ? Felt more like a little side street in good old Napoli. Regardless, I had witnessed the essence of a "third place" amongst the tomatoes and hanging chili peppers. 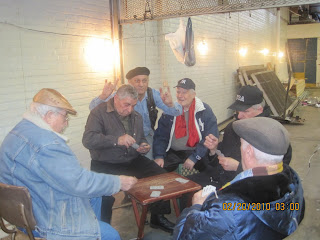 As this little enclave waits for spring, I ask myself: "What I am waiting for?".  Simple answer once again . The day when I can take a daily stroll through the narrow cobblestones of my Italian village, austere on the surface, yet happiest inside , "a braccetto" with my ever more beautiful wife.


Stay tuned for recipes in the next installment. We will be talking about pork stores.