Bathyscaphic voyage to the Pork Store

Today's trip to Arthur Avenue was a lot more fun than usual. Spent lots of time in the market people watching. I  mingled with the locals as much as I could,  had a few espressos and a sfogliatella pastry, a real good one , the way are supposed to be made (thanks Delillo's bakery).  Not a bad afternoon, not bad at all. It was exactly what I needed after a long week with way too many fourteen hour work days.

In preparation for tomorrow's dish - my take on orecchiette con cime di rapa - I made a quick stop at Calabria Pork Store.  My cousin - let's call her a trusted  "buongustaia"  - recently mentioned the place which I have known about since my childhood days. As a child I imaginatively used to call the place "The Pork Cavern". When you see it from the outside, what strikes you most is the fact that the store filled to the ceiling with hanging sausages of different varieties. Just take a look at the  Calabria Pork Store web site to see what I mean . Can people walk in , and stand ?

After visiting today I decided to call it something else. Just take a look at this close up. 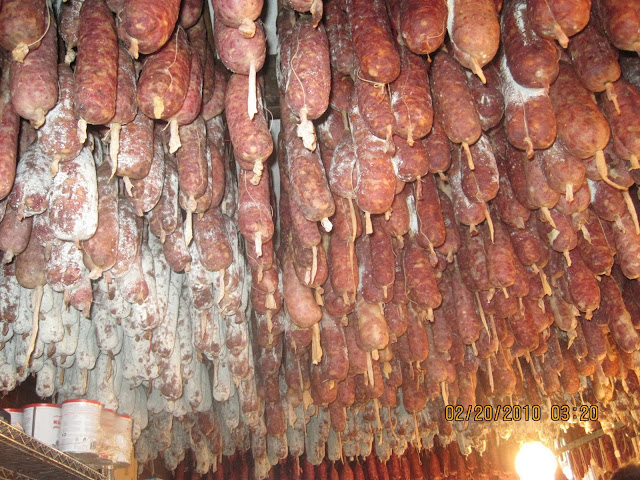 After crossing the store threshold, something strange happened. I found myself eerily voyaging into the inner depths and secrets of an ocean violated one to many times like an incautious marine spelunker. The place was dim-lighted, intensely scented by hanging provisions, strong cheese aromas and yes, the scent of other pilgrims. Disorientation and bewilderment quickly joined with excitement and curiosity.  At a certain point I asked: "Which way was up?"  And then: "What's , what's that hanging ? "  Were they  stalactites ? Worse yet, where they Giant Tube Worms (see  Riftia pachyptila) angrily intent on wreaking revenge on this disrespectful violator of the "Pork Cavern" ? I had seen those nightmarish creatures on National Geographic, and could not sleep for a week.


Fortunately, I came to when I overheard some conversations. "Wow , look at all that sausage" said a weak voice.  And I quickly realized I wasn't after all on some bathyscaphic joyride underneath the Atlantic ocean, but still there on Arthur avenue in the Belmont section of the Bronx. So after talking to some other Arthur Avenue pilgrims of the New Jersey's Cirillo clan, I picked up some fresh hot Italian sausages for tomorrow's orecchiette and White Anchovies in Vinegar (my Spaniard friends, you  will now them as Boquerones en vinagre). I knew that the "Trieste" hallucination had come to an end.

Back out on the street, a quick stop at Madonia Brothers Bakery where I picked up some prepared tomato focaccia, and the some of the best olive bread in New York (yes, all is relative in my book), it was time to head back home. I knew the trip had to be quick. The fan club was waiting for another recipe of "Twice Baked focaccia" pizza. 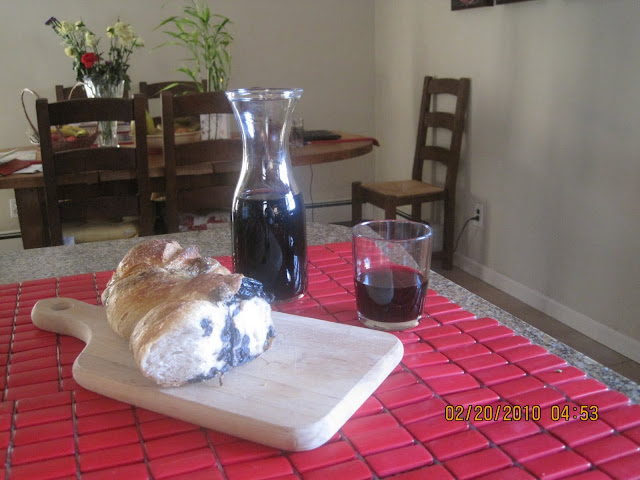 Rating: Half the pizza was gone within minutes . It sold itself. 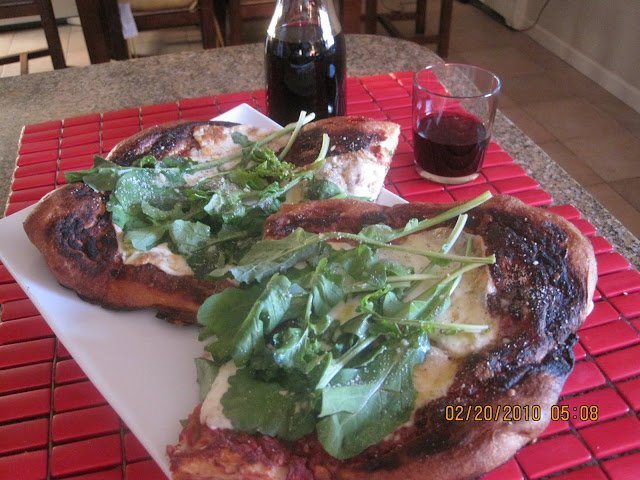 
Not much here. Preheat your oven to 450-475 F. Top the focaccia with fresh mozzarella . Bake until the mozzarella begins to brown. Remove from Oven . Top with Arugula, Extra Virgin Olive Oil, Parmigiano and fresh black pepper.