If you have been following the series, you would know that I have owed you some a few dishes. We had taken a Saturday trip to Arthur Avenue and picked up a few goodies.  I talked about Arthur Avenue in  Part I of this post. While shopping there , seeing some cannelloni shells in one of the stores inside the famous municipal market, I decided on making some stuffed pastas but not your predictable, usual one.  I decided to try my hand at something slightly different. Stuffed cannolloni , and stuffed pennoni. As I filling I envisioned one made of a savory goat cheese ricotta, a hint of Chèvre cheese and roasted eggplant

The trip was also followed up by some local shopping at Tarry Market,  just outside of my neighborhood. [editors note: click here for the post] At the Tarry Market,  the eatery, and gourmet market by the BB gang (aka Batali and Bastianch),  I knew I could find the goat milk ricotta. They carry some of the eclectic ingredients that I use when cooking.

My recipe also called for bechamel sauce. No shopping required for that.  It was freshly made from scratch.  I also won't list a recipe for the sauce as there are plenty of them on the Internet that you can follow.  Besides, I stuck to the classic one with no tricks of my own.  Here is one that you can use: click here.


Since I was in the mood to experiment and knew thought it would not take too much extra time - boy was I wrong -  I decided to make two dishes instead of one,  each with a different type of pasta and test them out on the fan club.

One of the reasons I underestimated the time of this work was that the dishes required many upfront steps. For example, the dishes required that I roast some Italian eggplant which had to be uniformly cut in to sticks. They looked great, and tasted even better after baking on a cookie sheet. Tempted to use them as a side dish on their own sometime in the future/

These eggplant sticks were baked on a cookie sheet until light brown .  Remember to peel the eggplant before creating the sticks. Toss with dry herbs ( I used dry thyme ), S/P, and EVOO bake around 375 F. After baking, I let them cool for a bit before folding into  a mixture of  seasoned ricotta cheese which I used as the stuffing for the pasta.

Making cannelloni is pretty straightforward once you have created your filling. Blanche the pasta shell, filled them with your favorite filling. Cover with  your selected sauce or sauces. In my case, the cannelloni had both a light tomato sauce and  layer of bechamel sauce.  For the stuffed pennoni recipe, in my attempt to make a slightly more elegant dish, I omitted the tomato sauce.  Then bake the pasta until crisp on the edges. 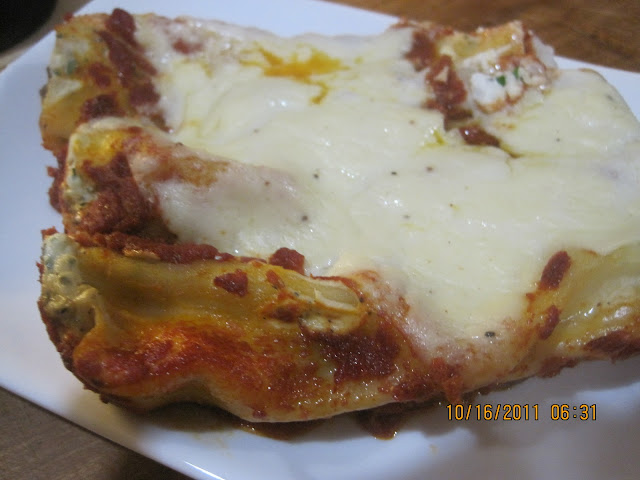 The bechamel sauce was used as a topping for the cannelloni, and was placed on top of a layer of tomato sauce. Stuffing the cannelloni and pennoni was a bit of a challenge and I had to devise a way to do it. I ended up using a Chinese chop stick to push the ricotta cheese  and eggplant mixture into each of the shells.

Roasted Eggplant  Goat Ricotta Pennoni
In Italian pennoni is a word that means  "large penne pasta". Given that penne is probably the second most popular form of pasta after spaghetti, not much more needs to be said. I boiled the the pennoni in salted water for a about 2 minutes, just enough so that the were no longer dry, but still remained uncooked.  The intent was to have them complete their cooking in the oven once stuffed with filling.

So what was the verdict ?   The fan club unanimously decided on the cannelloni as their favorite. I reluctantly agreed. To me, this was an impossible comparison of apples to oranges.  I played with too many variables: pasta type and a sauce mixture so a comparison was not entirely fair.  Regardless, my more peasant-friendly taste buds, liked the flavor experience of tomatoes blending with a cheese.  That's what the cannelloni brought to the forefront.  Friends,  l'll let you be the judge on this one.